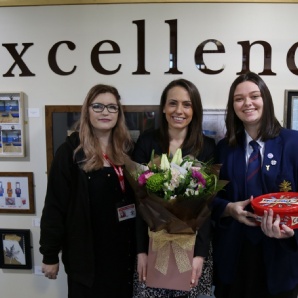 Carlton le Willows Head of Drama Miss Nicholls was bowled over when she was named winner of an Inspiring Teacher award from local salon Hairven.

Salon owner Collette Osborne came into Carlton le Willows to surprise Miss Nicholls with her award – after Year 9 student Poppy Slater put forward a nomination praising her form tutor for being so supportive.

The award is one of just two being presented to teachers across the county – out of a staggering 910 nominations.

Collette, who has Hairven salons in Gedling and Beeston, presented Poppy’s form tutor Miss Nicholls with a bouquet and voucher for a full hair and beauty makeover during half term.

Said Collette: “The nomination from Poppy was clearly very genuine and heartfelt. It shows that you’re not just teaching but going above and beyond that to support students.”

Head teacher Mr Weaver said: “It is so gratifying to see teachers being recognised for the work they do beyond teaching to support all our young people – and an amazing gesture by Hairven, to recognise people in their community in this way.”