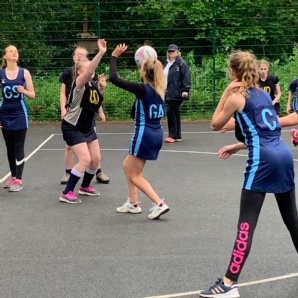 SIX netball teams from Carlton le Willows Academy spent a weekend at Condover Hall taking part in an end of season netball tournament at the end of May.

A total 47 players made up one Year 7 team, three Year 8 teams and two Year 9 squads who competed against just some of the 53 other netball teams taking part in the event.

The Year 8 teams went into the plate competition with the Navy team winning all of their matches. They then went on to play in the knockout stages and finished in 3rd place.

Said Mrs Jones: “With 59 teams taking part over this weekend there was a wide variety of ability from clubs to schools. The progress made by our girls over this weekend was amazing, their determination definitely stood out. “

When not playing students got the chance to take part in a variety of adventurous activities including high ropes, abseiling and climbing.