Our Student at Commonwealth Games 2018 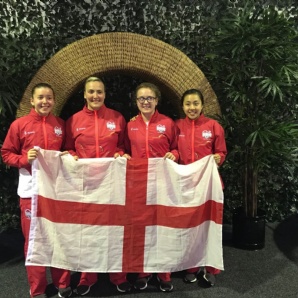 Sixth former Denise was part of England’s 390-strong team on the Gold Coast, and part of the 11-strong Table Tennis team, supported by Academy learning mentor and coach Evie Collier.

Aged just 16, Denise is working towards her BTEC Sport, studying online rather than in the classroom at Carlton le Willows.

Fortunately she rarely needs to head in to class, but can do when she is up in Nottingham – as she often is for training camps.

Speaking about her schooling, the teenager said: “It’s good, instead of going to school every day and rushing to training, I can work wherever I am in the world and be able train comfortably.

“I go in to school from time to time because it’s in Nottingham – where my training camps are – and the teachers are always so welcoming.”

When it comes to her training, Payet - who first picked up table tennis at the age of seven - clocks-up around five to six hours per DAY in order to keep herself sharp.

The Commonwealth Games was Denise’s first major senior tournament but she already has a hatful of experience under her belt having won the U15 gold at the Hungary Competition Grand Prix and silver in the junior category last year.

She also won gold and silver at the 2016 Cadet and Junior National Championships, bronze in the 2016 Slovakian Open and secured fifth place in the European Championships the same year. With this latest medal win under her belt, she now has the 2020 Olympics firmly in her sights. Good luck Denise!