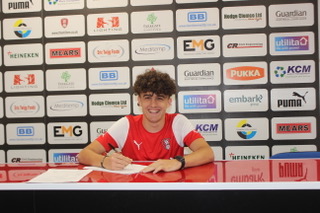 YEAR 11 footballer Curtis Durose is forging ahead with his professional dreams after signing as a scholar for Rotherham United Football Club.

Curtis, who along with his fellow Year 11s was due to sit GCSEs this summer, has signed a two-year scholarship deal to start the 20/21 season with the soon-to-be Championship club.

The move comes after Rotherham bosses made the offer in October last year after watching Curtis, the Sports Captain for Birch House, for some time. He had also been playing with RUFC U16s and their U18 team in the months prior to lockdown.

As a scholar Curtis will move to Rotherham where he will live during the week, training with the club while also continuing his further education. He says he is excited, looking forward to the challenge and working towards the ultimate goal of playing for the first team. Everyone at Carlton le Willows wishes Curtis the very best of luck!